There is no way at all I can share this lovely thing without it seeming like bragging. Oh well, hopefully it’s marginally better than the humblebrag …

I have always written short stories. I sold my first story before I sold my first book (but then the book came out first.) I have always read short stories (I grew up in New Zealand, we were – rightly – fed a diet of Katherine Mansfield from youth). I value the form. I love it when I get a short story commission, and have especially enjoyed those with a performance element – the stories for Radio 4 and for Radio 3’s The Verb.

And then Carine, someone I’d met on twitter, who had also attended a couple plays I’d directed, said she was on a mission to read all my stories. I thought that was very cool and offered to send her the bibliography of stories I’d put together a while ago. She worked through the bibliography and said there were a few I’d missed out. (No doubt! Partly because there are quite a few, but also partly because I don’t have them all on my own shelves. Sometimes I have given stories to people who asked for them, and then never seen the book they were printed in. Rare, but it happens.)
The other day, on twitter, Carine posted this picture, having got through her pile of stories : 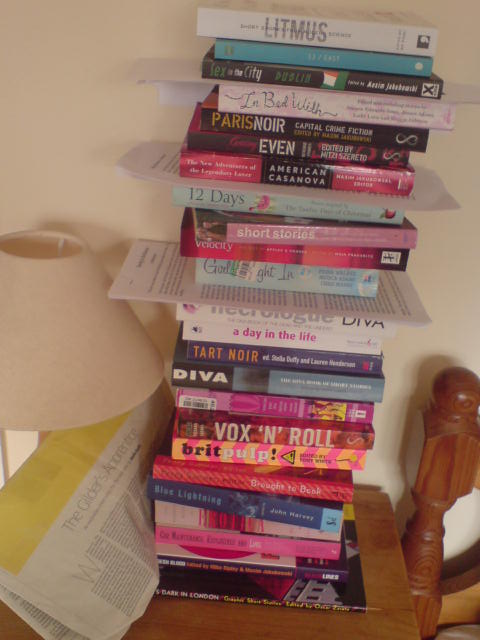 And today she sent me this essay on my work. Which is the not-humble-brag I’m now posting here. Partly to thank Carine’s very impressive efforts. Partly because I do love writing stories, I love the form, I enjoy the work, and I would like more people to read the ones I have out there. And partly because, as Carine also said : “It’s only fair if you mention them. It will give your readers an easier access to them.”

so, for those of you who fancy knowing more about them, here’s Carine’s take on my stories :

Back in May 2011, I was offered Singling Out The Couples. I liked the story and loved the writing even more. I finished the book somewhat tearful (also because it was the first novel written in the English language I read and understood without the help of a dictionary). I liked the book so much that I started reading the other novels by Stella Duffy and went to a couple of her excellent plays too. After The Wedding, a response to Beautiful Thing in Manchester, I still not had enough so I set about reading her short stories. I had read Martha Grace (in Tart Noir – Pan Macmillan, 2002) as well as Being The Baroness (in Little Black Dress – Polygon, 2006). I found a few more via Google and thinking I had read most of them, I twitted the question to Stella Duffy who in return very generously sent me the list of her short stories … I still had 36 stories left to find and read! It did take me some time to lay my hands on them (especially the magazine ones) but it was worth the effort (I also must confess a childish excitement at searching for the stories and waiting for the parcel to arrive). Stella Duffy’s stories are written with elegance, far from the stereotyped, ossified, dull stuff we are sometimes offered. They are complex, offer several levels of interpretation. They are sometimes told through several voices as if recounting several stories at once. And they keep giving more as you read them again and again.

There are the crime stories, though they are not really crime stories, wild humorous pieces rather, full of mischievous and ever so attractive characters : Lucky Dip (It’s Dark in London – Serpent’s Tail, 1996), Uncertainties and Small Surprises (Fresh Blood – Bloodlines, 1996), Could Be Better (Brought to Book – Women’s Press, 1998), Cancer Man and the Lady in the Moon (Vox n’Roll – Serpent’s Tail, 2000), Martha Grace, Ladies Fingers (Necrologue – Diva Books, 2003), Payment in Kind (Getting Even – Serpent’s Tail, 2007), and my favourite of all (but I am bound to be biased here) Un Bon Repas Doit Commencer Par La Faim (Paris Noir – Serpent’s Tail, 2007). In these stories everything is in the last sentence. Like a trick on the reader, they take you to unexpected places.

There are the more internal stories, where loss, sickness and death cohabit with an undeniable joie de vivre, where a dark creeps under the humour. They are The Body and The Land Are One (Car Maintenance, Explosives and Love – Spinifex, 1997), A Swimmer’s Tale (Girls Night In, Harper Collins, 2000), Ten Times Proud (Diva Book of Short Stories – Diva, 2000), A Partridge in a Pear Tree (12 Days – Virago, 2004).

There are also the stories that tell us we have nothing even if we believe we have everything : Malvolia Waiting on Epiphany (Thirteen – Do-Not Press, 2002), Forty Year Old Women Dancing Barefoot in Sydney (A Day in the Life – Transworld, 2003), and Being The Baroness (“Because the end will come, and each of us will lie alone in our little black dresses, in our little black boxes, in the deep back earth. Quiet, and single. And all the gold rings in the world can’t save us from that”).

And then there are the stories that stand on their own (in my own non-professional opinion) : Notes to Support Funding (33 – Glasshouse Books, 2010), not quite a story, a stroll in and around Woolwich. Everything is Moving (Litmus – Comma Press, 2011), where science, history, spirituality and “the geometry of love” cohabit. To be honest I find this one quite complex (not complicated, but very complex) so I keep coming back to it, understand a bit more or getting more confused. And of course the gorgeous The Gilder’s Apprentice (published on New Year’s Day in the Independent on Sunday, 2012), a tale about creation (“It is tiring, literally pouring himself, his life, his life blood, into everything he does. But he does love that job”). Once more you’ll find several levels of interpretations though I thought the writing was quite different from the other stories : a proper tale (beautifully illustrated by Simon Pemberton).

So these are some of the nearly fifty short stories by Stella Duffy who is my favourite writer for the humour, the fun, the wickedness, and also the truth, the lucidity. Her short stories are a great continuity to her novels and theatre work. So if you can, do take the time to search for and read her stories. You will be AMPLY rewarded for your ‘efforts’.

6 thoughts on “all my stories (also, what twitter does)”