Last night I did a storytelling event for Jewish Book Week, with the theme of A Close Call – in some ways the close call was that I was rushing off immediately to The Royal Festival Hall to read half an hour later for World Book Night – we made it just in time, and it was a lovely combination of events. Several people have very kindly told me today they loved the live story, so here it is. It probably works better told live than on the page, but you can imagine …

My father joined the New Zealand Air Force in 1939 – a good old-fashioned socialist he’d probably have fought in Spain had he been old enough, and was determined to do the right thing against Hitler’s fascists. In November 1941 he was shot down over Germany. A rear-gunner/wireless operator in Lancasters, it’s astonishing he survived the crash, he pulled friends from the plane wreck, one survived, the other didn’t, my father’s leg was broken in four places and it caused him pain for the rest of his life. As kids we used to kind of laugh at him, when he’d get up from kneeling in front of the fire to make it up, getting up going “agh”. Now, with my own arthritic knees, it’s not so funny. When I left home at 18, he gave me his PoW diaries. I’d like to share one entry with you.
8th March, 1942
arose 8am. Wen out on Role call. About 8.30am had slice of toast and cup of tea, then went back to bed. Arose 10am had a wash and at 10.30am went to church in 18A. About 11.15am had about half a cup of mushroom soup, terrible stuff (1½ mushrooms to 20 gls of water).
At 12.30pm had slice and a half of bread and margarine. Went to bed again and read “Meet Mr Mulliner”. Role call at 4pm. After roll call had quarter of a tin of stew and potatoes also slice of bread and margarine. Went back to bed finished book and took it into Johnny Dodd came back washed the three dixies then back to bed (to dream of food).
At 7pm drink of hot water and condensed milk with slice and a half of bread and margarine with a little condensed milk on it. Lay on my bed till 8.15pm then made it and retired.
(so much for my 21st birthday.)
My Dad, who was 5’8” weighed five and a half stone when he was freed. My Dad, the anti-fascist who always said the Jews had it far worse and it was about doing the right thing.

In 1940, my Londoner mother, who was bombed out of three different houses during WW2, also joined up. She was stationed all over Britain, on the ack-ack guns. These days we know they made very little difference to the planes overhead, at the time though, at 19, 20, 21, I know she needed to do something. When she was home on leave she returned to the place her parents now had in Kennington. Her father, who had been in the First World War himself, was now a fireman on the docks. A ghastly, dirty, terrifying job. Every morning he’d come home from putting out fires all night, covered in smoke and dirt. My Mum used to say the burning sugar was the worst, it stuck to clothes, in the hair, continued to burn the skin when it touched. One morning, on his way home from a night like all the others, covered in dirt and ash and smoke, he stopped off at the air-raid shelter to book a place for his family, his wife, his son & daughter home on leave, the youngest having already run away to join the Navy, lying about his age at sixteen.
That evening, when the air raid siren went, the family went to the shelter to take their places. But the woman on the door wouldn’t let them in. She didn’t recognise my mother’s father, said she’d promised the places to a fireman and his family. She didn’t recognise my grandfather without the grime. They had no papers, they’d all gone when their last place was destroyed, and so, they went home, waited out the night. In the morning they heard the air raid shelter had taken a direct hit, almost everyone inside was dead.

In 1957 my father was diagnosed with cancer. My parents had six children, my mother had just given birth to my sister, the fact that he would lose one testicle to surgery was, to my Dad, to a bloke like my Dad, far worse than the surgeon-assured certainty that radiotherapy would make him sterile. He underwent the grueling 1950s-style radiotherapy, a treatment that meant for the rest of his life he would leave the room if anyone ever talked about cancer as it still made him feel nauseous. He survived and, 5 years later, in 1962, my mother realised she hadn’t had a period – ”seen a period” as she used to say – for 4 months. She knew my father was infertile, she knew they couldn’t have more children, she assumed she was having an early menopause. A month later she went to the doctor, he told her she was five months pregnant. We were all born premature, three months later, at the end of the long winter of 1963, my Mum gave birth to me.

My family moved to my father’s native New Zealand when I was five. I love swimming, love swimming in the wild ocean best of all. One summer day, at the age of eleven, I was swimming in the sea with my Dad. He used to float with his feet sticking out of the water, above the waves. Head – belly – feet. He looked like the Loch Ness Monster. I used to go far out, beyond the breakers.
The waves are huge and lift me way up and drop me down again. It’s fantastic.
After a while my Dad swims out to where I am. Slowly, without splashing.
He says it’s time to get out. Oh, but why?
Get out of the water. But, why?
Get out and stop splashing. Oh, but Dad! Why?
There’s … a … shark.
Quietly, not splashing, so we don’t make a noise that might attract the shark, we get out of the water. Then I see that everyone else is out too. That it was just me in there, playing in the waves. Playing with the shark.
My Dad taught us all the right things to do in water. Except be afraid of it.

When I was fourteen I swam across a lake. I’d been swimming with our dog, and without noticing it, I found I’d got about half way across. And so, being fourteen, I figured the sensible thing to do would be to swim the whole way. Right across the lake. The dog turned back and I swam on.
And while I’m swimming everything is clear. Arms and legs, heart and lungs working in unison, my body totally supported by the dark green lake, oxygen weed tickling my toes and the low hum of the dam’s turbines whenever I put my head under the water.
But when I come up the shore has shifted. The current has moved me. I’m not where I thought I was. Where I thought I’d be. I’ve missed the boat ramp and come up in gorse and blackberries, they come right down to the shore. I’ve been in the water for an hour, hour and a half, it’s late afternoon, getting cold. I go along the edge of the lake, looking for a path back up to the road, anywhere Mum and Dad might have stopped. Eventually we find each other.
What the bloody hell did you think you were doing?
When you don’t know your child is really a mermaid, it’s hard to trust she’s never going to drown.

When I was thirty six, I woke up one morning to find a large lump under my right breast. It took six weeks to persuade the doctors and nurses and polite but unconcerned medics that there was something wrong. Well, I was only thirty-six, it didn’t present as a tumor, we didn’t have breast cancer in the family. We do now. And so I had surgery and six months of chemo and two months of radiotherapy and yes, it’s great that I’m alive. But I didn’t win a battle or fight successfully or any of those other awful military metaphors people use to talk about disease. My dear sister-in-law who’s just died after living splendidly with bowel cancer, then liver cancer, for three and a half years isn’t a loser because she died in the end. She didn’t lose her battle. She was just unlucky. I am very lucky to be alive. But I get tired of people saying I’m lucky. Because aren’t we all?

Isn’t the survival of each of us something wondrous? I’ve had my close calls – the father who nearly died not once but several times, the mother who survived being bombed out of three different homes and seven pregnancies, not all of them ending in live births, who wasn’t allowed into a bomb shelter where everyone else died. The utter ludicrousness of those two people coming together, finding each other across a planet and during a world war, being introduced by the woman who was my mother’s pen friend, my father’s ex-girlfriend Ouida, the woman who later became a nun called Sister Stella Maris. The nun I’m named after. The times I might have drowned but trusted in my mermaid lives, the times the sharks weren’t hungry, and the time cancer might have killed me, and the dozens of times, day after day, when we all have our close calls, when we cross the road without really looking, or drink too much or eat rubbish or smoke or just don’t look where we’re going. Or we look where we’re going but someone else doesn’t, and still they miss us.

So we all have our close calls, being here at all is a close call. We are fragile, delicate things, us people. And that line between here and not here is so fine. Life – and death – are astonishing, aren’t they? I’ve been practicing Buddhism for twenty-five years and we have a guidance that is “regard your survival as wondrous”, because we are, all of us, close calls.

and here’s the first diary page : 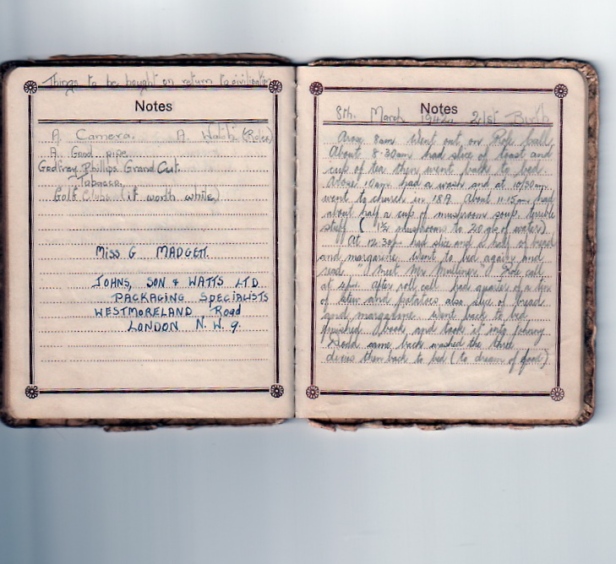 I love the page opposite too “things to be bought on return to civilisation”
sadly I can tell you he never bought the Rolex or the camera. (or the golf clubs, possibly not worth while?!)

ps – Meg Rossoff was storytelling at the JBW event too, she told a great story about first coming to the UK in 1979. Really nice woman as well as lovely writer, with a great blog.

6 thoughts on “A Close Call”