I met Lindy in Melbourne in 2002, she showed me a fine time, and I’m delighted to introduce her to you here :

About Lindy : Lindy is an Australian writer who long ago gave up the fantasy of growing up to be a famous scientist. The fact that she still harbours a desire to be an astronaut, a warrior chick or an Apache-helicopter pilot would hint that she perhaps hasn’t, however, grown up much at all.
Lindy’s first published novel was the archaeological adventure Golden Relic. Before being a paperback it was serialised a chapter a month, for 10 months, on the internet as a promotional lead-up to the prestigious International Council of Museums conference held in Melbourne in 1998. Golden Relic was actually commissioned by the Museum of Victoria (Australia) for ICOM ’98; which means Lindy was probably the first writer to earn money from the then fledgling internet. Golden Relic has now come full circle back to the internet as an eBook.
Her second novel, Blood Guilt, and its two sequels, featuring Melbourne PI Kit O’Malley – Bleeding Hearts and Thicker Than Water – are published by her American publisher Bywater Books.
Bleeding Hearts won the Readers’ Vote in Australia’s two major crime writing awards: the Ned Kelly Awards in 2001 and the Davitt Awards in 2002. Thicker Than Water won the Davitt Readers’ Vote in 2004. Lindy’s latest fiction is the espionage adventure thriller Redback featuring the very cool Bryn Gideon and her team of retrieval agents.
Before plunging into the world of make-believe, Lindy worked as a journalist and a book editor. She has been a National Co-Convenor and founding member of Sisters in Crime Australia, and editor of the group’s magazine Stiletto. This year she’s also chair of the SinC-Oz programming committee for the SheKilda Women Crime Writers’ Convention – which is being held in Melbourne (October 7-9) this year to celebrate the group’s 20th anniversary.
Somehow, in the last little while, Lindy also found herself writing and commissioning anthologies of true crime. She is therefore also the contributing editor of Meaner Than Fiction and Outside the Law 2; and editor of Outside the Law 3. With her sister, Fin J. Ross, she co-wrote Killer in the Family (not her own!); and she is also co-author, with Ruth Wykes, of Women Who Kill (again, no one she knows!) Lindy much prefers to make things up, however, and is currently working on the sequel to Redback; and a YA urban fantasy time-travelling adventure.

Lindy says :
The idea of visiting the blogs of bloggers – and in this case the blog of a fellow Bywater Books author – is very cool until you have to sit down and work out what the hell to blog about. Logically I should take the opportunity to talk about my Bywater Books – a splendid mystery trilogy (even if I do say so myself) featuring a lesbian private investigator called Kit O’Malley who treads the mean streets of Melbourne solving crimes and falling in lust and love.

That does seem like the best thing to do given this is a Bywater Books author blog tour. But, though I will come back to my O’Malley mysteries in a moment – because I’d love to find her a new audience in the UK – there are other things I could talk about too.
Like me for instance.

Hello Stella’s Blog Followers
I am an Australian crime writer of fact and fiction. I am also a brand new independent Aussie publisher – having launched my own company late last year. Clan Destine Press is my little crazy endeavour. And I now find I have a great deal in common – not only with Stella and the other Bywater authors – but also with the Bywater publishers. Including, on two fronts because they are both authors and Bywater Books publishers, Val McDermid and Marianne Martin. Such company I keep.
Anyway, some people – all those boring doomsayers – keep telling me I’m crazy to be starting a publishing company when books and bookshops won’t exist in 10 minutes. To them I say pish and ppfft. There will always be paper books as long as there are readers, because WE aren’t going anywhere. Other people just ask me if I have any idea what I’m getting myself into – which is a whole other thing altogether.

I launched Clan Destine Press with three books. One book is my own action adventure novel Redback (which had previously been published by MIRA, so no, this is not a vanity thing); another, Out of the Black Land, is a historical novel set in Ancient Egypt and written by Kerry Greenwood, one of Australia’s most beloved and prolific mystery writers. The third novel, Dougal’s Diary, is a cat book written by David Greagg who happens to be a fair dinkum accredited Wizard who ghost-wrote a journal for his gentleman cat Dougal, detailing the first year of his life. So Clan Destine Press specialises in genre fiction. And cats. And, as of this year, true crime. And every paperback I publish is also released as an eBook (because I’m not silly); and some of our books are only eBooks. This year I’m publishing 10 books – six as paperbacks.
In saying that, I suspect I may in fact be mad.
What I do want to do is publish new exciting edgy genre fiction. I want to give already-published authors a place to try something new, (especially when their big-name publisher just wants them to continue writing the series that makes them money even if the author is going demented from not being allowed to branch out). And I want to discover new voices in crime and spec fic and science fiction and historical fiction and, and…
I am already getting a taste of what it’s like to gather a clan of writers together, to nuture and mentor and publish and promote. I have an idea of what my publishers – as in the humans at Bywater Books – have been up to these last few years: taking in the previously-published like Stella and me; and taking on new writers, giving them a start and throwing them out into the world.
And like Stella whose latest book is not a Bywater Books book, neither is mine.
My latest is Redback a fast-pace international thriller with a kick-arse female hero Bryn Gideon who is kick-arse because she was trained to be just that, not because she just ‘happens to be’. 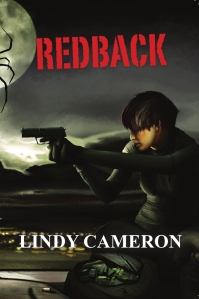 She leads a crack team of kick-arse guys called The Redbacks who are retrieval agents. It’s their job to rescue hostages when the Australian government can’t – because, you know, governments don’t negotiate with kidnappers or terrorists. But of course along the way my Gideon and her Redbacks stumble across a PLOT that threatens everything and they have to step in and put things right. That’s what they do.

So I would love it if you all check out my latest book, and take a trip Bywater and get to know the crazy and quirky Kit O’Malley, and do a virtual drop-by by Clan Destine Press to check out MY fabulous authors.
I figure if you follow the extraordinary Stella then you’re all readers. And readers are what we writers and publisher wish for more than anything else.