In 2000, on my 37th birthday, I had the (good) news that my breast cancer had not spread to my lymph nodes and the (bad) news that the tumour had blood vessel ‘involvement’ and so chemo was the order of the day (this is after surgery and before radiotherapy). By then, after 6 weeks of walking around with the tumour prior to diagnosis (“you’re too young”/”it’s not in your family”/”breast cancer doesn’t present as a large lump” – despite my feeling it definitely was cancer, and my feeling being proved right) and looking up everything I could find about the disease in younger women, I knew what chemo was likely to mean. It was likely to mean that fertility would be drastically reduced (my oncologist said maybe about a 70% chance of infertility) and that – as a gay woman – there would be no chance of a happy accident with that remaining 30%. The children my wife and I had been planning, hoping, organising to have with our chosen babyfather (our first ‘try’ was to have been on the day of my biopsy to work out what the big red lump really was) would be very very much less likely. And they never came. My wife did get pregnant but miscarried and wasn’t able to conceive again, I had five embryos made and frozen before chemo, I tried with them all, in two years after treatment, none survived in me for more than 2 weeks. It was a hard time over the next three years, cancer treatment leading into IVF with the embryos and wanting so much to be a mother and failing so miserably every time. (And even in those three years, I did great work and loved and laughed and also had a good time, I remember I did, there will have been people watching me on stage in Lifegame while I was having chemo who had no idea what was going on, as with anyone working through illness, but at base was always the fear, the pain, the baby-dream loss, on and on.) My own mother died suddenly the week after I’d had the last two embryos transferred. They failed too.

And for a long time it felt like my birthday and cancer and infertility were joined. It made me not want to make a big deal out of my birthday, not want to do much on the day, it was as much the anniversary of my full cancer diagnosis as it was the anniversary of my birth. Anyone who’s had any life-threatening or chronic illness can tell you there isn’t one day or one moment or one diagnosis, there are several and often many and they all add up to a through-line of Being Ill, rather than the usual televisual or fictional version that makes the single diagnosis the Big Moment.
But now … I’m fifty this weekend.
And I’m find I’m really excited about it.
(Admittedly, I have just spent the past 3 weeks in NZ celebrating with family & old friends before the fact, but I’m still excited.)

I’m thrilled to be alive, not least because I have many loved ones who aren’t. People who were diagnosed around the same time as me, or after, and have not made it this far. I am most definitely not a ‘survivor’, not least because I refuse to use the military language around illness, the language that implies those who are not ‘survivors’ haven’t tried hard enough, worked hard enough, that they lost their ‘battle’. It’s not a battleground, it’s my body.

But there was a time, when I first found the lump, began treatment, that I didn’t know I’d live to fifty. Admittedly, none of us knows this, but those of us who have to confront our mortality through illness know it in a different way, I think. Just as, in truth, ALL of us are lucky to be alive, yet it’s mostly only those of us who’ve been through a Big Thing who are told how “lucky” we are. I don’t feel lucky, I do feel grateful.
And so it’s with joy and gratitude I will turn fifty.

Gratitude for life. Mine and yours and the lives of those no longer with us.
Gratitude to the feminist foremothers (and fathers) of the women’s movement, for having given me chances and opportunities that are still denied most women in most of the world.
Gratitude for the ‘aspirational working class’ parents (NOT the Cameron kind!) who wanted an education for me that they were denied themselves, and that wasn’t available to most of my siblings.
Gratitude for the LGBTQI and straight campaigners and organisations who came before us and made it safer for me (white, western) to be out, who have given us good role models to continue our work making a safer and more welcoming world for all.
Gratitude for my Buddhist practice that has sustained me since 1986.
Gratitude to my siblings who have always been supportive of their baby sister – and who have shown that being in your 50s and 60s is a fine thing to be, and to my cousins, also all 50s and 60s, who so recently welcomed us in NZ, with love and food and singing into the night. There is a joy in being the baby of the family, and it’s not what they let you get away with (not a thing), but the role models they all provide.
Gratitude to both my homelands, London and Aotearoa (and to my two-culture parents) which means I will always miss one while living in and loving the other. Missing isn’t bad, missing reminds me there is more to work for, to try for.
Gratitude to readers and audiences, editors and agents, artists and designers, musicians and dancers, actors and performers and writers, to all those I work with in my book-making/theatre-making worlds, to the mentees who had the courage to ask for help, all of whom support and encourage me to work harder, be better, do more, stretch further, explore, engage, touch danger.
Gratitude to friends. The people I work with who are friends. The old friends from way back, those in NZ, here in the UK and elsewhere. The old friends who have watched me grow up as I watched them, the newer friends who have welcomed me into their lives, and them into mine.
Gratitude to my Mrs. Of course. As ever. For everything. And to her family of loving in-laws. (And for the struggle it took to get there, well worth the persevering.)

And joy …
Joy because I was a hopeless teenager and not much better at being in my 20s. It was all (mostly) agonising and I thought no-one understood. And maybe they didn’t, but maybe I also enjoyed the drama a bit too much as well, maybe I bought too readily the dangerous myth that artists need to be ‘a little mad’ – no, we need to be supported and loved and sane, that way we can make work.
Joy because my 30s were thrilling and heartbreaking, and in my 40s, especially my later 40s, the woman I want to be and the work I want to do have finally begun to come together … directing absolutely brings together both my acting and my writing work, I know how it feels to be both actor and playwright and I believe I am a better director because of that; I mostly work with people I want to work with (am getting much better at weeding out the moaners and grumblers, the energy-sappers); I mostly work in the places I want to be (loving the invitations this year to Bristol, to Newcastle, to favourite places – ahem, Auckland?? Wellington??); I mostly make the work I want to make. I’m still often doing this out of contract, without a commission, relying on other work to pay for the as-yet-unpaid work, so that my main energy can be directed into projects I TRULY care about. (This choice of directed energy is not yet happening all the time, that’s a good aim for my 50s and 60s though.)
I wanted all this in my 20s and 30s too, but perhaps it was too soon, perhaps I didn’t know enough, hadn’t lived enough yet. I find it enormously exciting that in my 80s – if I get there – I will be able to look back to now and will again see how far I yet had to go.
Joy that I feel like I’m beginning again. Stepping into my ‘power’ (whatever that turns out to be), into my place as a woman who is less afraid, less worried, less screwed up, less scared, less frightened, less-any-rubbish-thing than I’ve ever been before.
And yes, there is a raised-Catholic part of me that is scared to say this, in case it’s tempting fate, but too bad – I’m delighted to be turning fifty. It feels only good. And I am thrilled to finally feel excited about my birthday again. 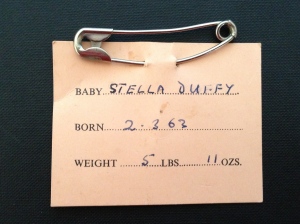 Lou Reed turned 21 on the day I was born. Here’s a story that starts there.
Harry, Mark and John

22 thoughts on “a celebration of turning 50”