I’ve spent half of today wondering if I should show a semi-naked picture of me to facebook and twitter. It is of my (annoyingly, still, 6 weeks on) not-healing/open-wound post-mastectomy ‘breast’. (It’s not a breast, it’s some stomach tissue and some stomach skin and some not-coping-original breast skin – not coping because it had radiotherapy during my last breast cancer – re-modelled into a ‘breast’ shape, it’s most definitely not an actual breast.)
I thought it might be a kind of punctuation mark in the idea of what, exactly, ‘raises awareness’.
I took a bunch of pictures, they’re very ugly, we’re not used to flesh looking open and raw and red and … yellow. ANYWAY, I didn’t post them, partly because I knew that if I did post them, I would feel very exposed and vulnerable and tonight, 41 days, not quite 6 weeks since my surgery, I was hosting Stonewall‘s annual fundraising dinner. And I needed to feel brave because Stonewall’s issues and causes were bigger than my own personal twitter and facebook furies today. (Sometimes they align, not always.)
It’s the big one, it’s at the Dorchester, it’s dead flash, it really matters because it raises money for loads of vital work … and it still terrifies me, even though tonight was the third time I’ve hosted it, because it’s so very LIVE. And stuff happens, it changes.
It changes as the night progresses, as it should.
Tonight Christopher Biggins proved what an utter star he is as he totally flew with about a dozen gay women from all spheres of UK life (many of them telly-famous, + the likes of me) combined, utterly live, non-planned, auctioning themselves to make/serve and host a dinner. At Mary Portas’ place. Cooked by Allegra McEvedy and Jack Monroe. In one fell swoop it raised £23.5k. (And I promised myself as a waitress. I am a rubbish waitress.)

So, today I didn’t post a pic of my still-unhealed breast wound. In truth, I still think it is far more likely to provoke breast-cancer-awareness than any amount of non-cancerous women showing themselves without makeup (and if we do want to address that massive issue, the makeup one, a proper issue, all by itself, that needs its own awareness campaign, I’m totally there, it’s about bloody time, eh, feminism?, but I’d rather not conflate the two) … so I will post this one instead.
It’s what we looked like, having ‘auctioned’ ourselves for Stonewall.
It’s what making a difference in workplaces and schools and care homes ALSO looks like.
Because that’s what the money raised goes to. Yes, it’s great to be able to get married, I want to, I’m glad to, but the legislative part of Stonewall is a very small part of the overall work it does.

And meanwhile, from the personal pov, … sometimes it IS what you look like, on top, that matters most, that can make a difference. Not how scared, shy, worried, upset, vulnerable you feel underneath. How scared, shy, worried, upset, vulnerable I feel underneath.
Because we ALL feel those things underneath, all the time. I promise you.
Right now, when my own skin is failing to heal, failing to protect, I feel it more than ever before. I feel the rawness of my humanity, right on the top of my bones, like an actual feeling, one I have no words for.
Tonight, I put on my ‘brave’ mask, and I did the (volunteer, obv) work that was asked of me, work I had agreed to do before I was diagnosed – to support and promote a cause and an organisation I care about, passionately.
Tonight, dressing up, and wearing makeup, standing up and improvising my script in front of 550 people, was far braver than a photo of a bare-faced me.
Because I was standing scared – and standing anyway.

And here’s Stonewall’s immensely powerful new campaign – linking ALL bullying, vitally acknowledging that all prejudice is part of a continuum, and we need to fix it ALL, not just our own bit of it. No Bystanders

Right then, back to changing the world with Fun Palaces. 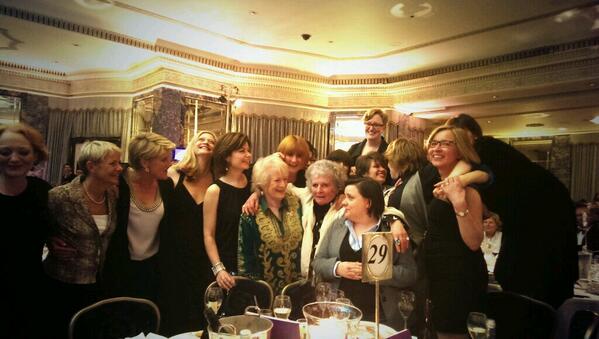 This is what the women who spontaneously came together to create an un-organised auctionable ‘lot’ looked like after the bidding. (Shocked – and delighted- that anyone would pay that money for that rabble!)

8 thoughts on “sometimes, being brave IS wearing makeup”