I’m on the edge of tears almost all the time at the moment.
I’ve spent the past twenty months working towards this coming weekend and I can’t quite believe we’re actually here. This year alone I’ve had breast cancer for the second time, two big surgeries and one little one, my father-in-law was diagnosed with an advanced cancer and died, painfully and heartbreakingly. Yet alongside that, my first collection of short stories was published, I’ve written the first draft of a new play, finished my fourteenth novel, directed a show that was on in NYC & did some work on another with amazing people, and written a novella I’m hugely excited about (but not allowed to say what or why yet). And beneath all of this, pulling me forward, pulling me through illness and pain and recovery and work – the joy of work! – has been this weekend. The 4th and 5th of October 2014. The first Fun Palaces weekend.

Here’s a bit of background for those of you who haven’t heard me banging on about it since last January :

The Fun Palace was originally devised by theatre director Joan Littlewood and architect Cedric Price. Back in the early 60s, they imagined a building where you could watch a band (and learn how to play from the musicians after the gig), attend a lecture on mechanics, have a pint, listen to some opera, watch the football, view monkeys in the zoo via a live camera feed, or just sit back and soak it all in. This was pretty radical back then – spaces full of people deciding what they wanted to do, being allowed to choose – for themselves – what was ‘good for them’. An idea that the arts and sciences belonged not just to an educated elite – but to the masses – if only we would share them with those masses. And although Joan and Cedric came very close, in the end, the money for the building and the land was not forthcoming.
In January 2013 I suggested at Improbable’s D&D that perhaps we could do something for Joan Littlewood’s centenary on October 6th 2014. Something that wasn’t a play. We started to talk about the Fun Palace, Joan and Cedric price’s vision of a way make the arts and sciences, learning and engagement, accessible to all – truly accessible, truly involving. Not just being an audience member, or a quietly listening student, but participating, creating. That little idea of making one or two Fun Palaces quickly evolved into the Fun Palaces weekend, a campaign for community involvement in arts and sciences …

Now there are 137 Fun Palaces across the UK and beyond, created by and for local people.

Hundreds of people have had a hand in creating these community events – they’ve booked venues, arranged activities, asked for sponsorship, spoken in council meetings, asked for and been granted funding. They’ve worked with neighbours they’d never met before, discovered new skills, and recalled ones they’d long forgotten. I feel privileged to be part of something that has shown so clearly what Joan Littlewood called “the genius in every person”.

I didn’t know about that ‘genius’ when I was a kid. I was born in a council estate in Woolwich and grew up in a timber town in New Zealand. For us, in Tokoroa in the 1960s and 70s, going to a mainstream theatre or an art gallery involved a five-hour round trip to Auckland, but more than that, it would have needed my mum and dad to feel comfortable in such places. And they didn’t, so I didn’t. I was fifteen before I met someone who came from a background like mine who was working in the arts – it opened my eyes, made me realize that my dreams might not be so impossible. I don’t believe we’ve changed the world enough yet, I think there are still millions of kids like the teenage me, kids who don’t know how amazing they can be – as well as too many grown adults who also don’t know how amazing they can be. And how amazing they are might be something they discover from their local Fun Palace – from helping to make one, from visiting one, enjoying it this year and deciding to make one next year.
It’s not THE solution, of course, but it might be a beginning. It might be one way to make a difference.

And that’s why I’m close to tears all the time right now. That’s why, sitting alone in the office at 6.45pm tonight, I was suddenly sobbing. Because it’s been a hell of a year (and it’s only 3/4 through!) and it’s been an astonishing year and I feel so grateful to all the amazing people who have stepped up to create this extraordinary thing. Because the team I’m working with is amazing. Because the Fun Palaces makers all over the country, and further abroad, are incredible people – most of them volunteers, all of them making a real difference right where they live. Because I’m very aware that although the weekend is about to happen, with all the attention and build-up, truly making the Fun Palace, truly making all arts and all sciences accessible to everyone (and what an astonishing society would we have if everyone really knew and used their own genius?!) – is a lifetime’s work. And it never stops. We had a chat in the office this afternoon and agreed we’d be back at work on Monday, planning for Fun Palaces 2015. There’s a lot to do.

Friday 3rd sees the first Fun Palace of the weekend, with a school group (hence being on the Friday), at the London Metropolitan Archives, then Parkes Shire Library in Australia, then all the others in England, Wales, Scotland, Northern Ireland, Iceland, Germany, France and Canada.
Find your closest one here. 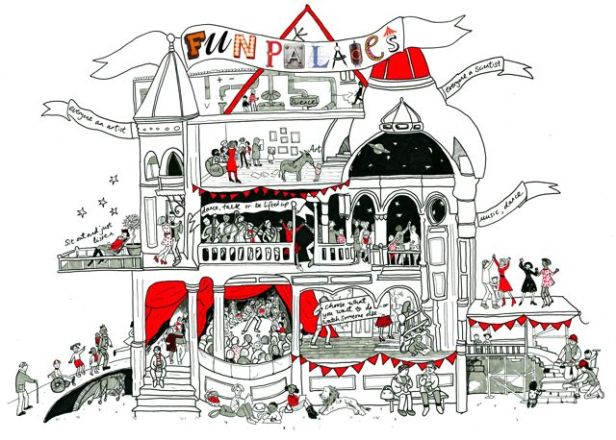