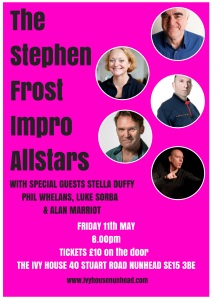 Sunday, 13 May, 4.15pm : Fertility Fight Club at Fertility Fest, Bush Theatre – I’m ‘arguing’ Yes, I Wanted Children – No, I Don’t Want Your Children. The ‘…’ is because I will, as ever, be improvising not arguing, and speaking from my heart (I hope!) rather than a written script, and trying to be in the moment/honest/open. So the title is likely more of a guide written three months ago than a truth about what I’ll say on Sunday. Or not.

16 May, 9pm : Olly Hawes dark, tough, bloody important, hugely interesting The Absolute Truth About Absolutely Everything Camden People’s Theatre, 9pm on Wed 16th. I saw an early rehearsal, so I know a bit more about it than most women performers who agree to join in, but not much. I do know I think it’s vital that men make this work, the work about their conspiracy in and with patriarchy. 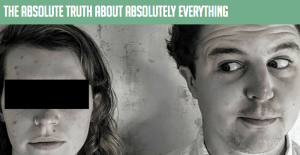 There’s also a bunch of great Fun Palaces meetings and some diversity/inclusion speaking on FPs and my/our work for a couple of corporate/creative events and some writing of two new book proposals (woop!), but they’re the ongoing always work …

Did. Obv.
Still.
Thank you @divamagazine - especially honoured as it’s the Lyra McKee award.
Spectacular blossoming.
You are welcome to your pubs, my dears.
We will remember them.