Today I have been finishing and putting aside – finishing the last bit of the book edit I will do for three weeks, finishing reading books for the Green Carnation Prize, clearing my to-do list and clearing my email inbox.

I have also been going through several bags of notes, piles of paper and images, file after file after file in my Taniwha folder in the Shaky Isles folder on my desktop. I have transferred all that to both a memory stick and my laptop. (Can never be too careful with the backups.) I have printed up the contacts sheet. I have put it into a ringbinder. I have printed up and cut out the show’s image and stuck that on to the front of the ringbinder. It’s all deliciously Back to School.

The ringbinder also contains many pages of ideas and possibilities, some of them (a few) even written up as scenes, whole, proper, actual scenes. And two songs. And a spreadsheet with the cast’s availability during rehearsals. (So excited, whole hours where everyone will be together at one time!)

After 5 months of prep days on and off (approx ten days actual work), and many more emails and texts and even phone conversations (I don’t do phone if I can help it), we start full time rehearsing tomorrow morning.

Perhaps this is how we make work these days. Perhaps it’s even beneficial to make work slowly, over time, when those who make up the company have a day or two spare, not least because most people in the company are earning their money elsewhere, very often with other theatre or arts companies. Perhaps the new nature of our working (making a show over 6 months rather than in a pressured 4 weeks) will show benefits. I feel that it might. We’re an unfunded company, the hoops we’d have to go through to get any money are simply not worth it to us at the moment. (The hoops we have been through in the past and wasted so many hours on interminable application forms and still failed to tick the magic boxes that would open the door to public funds – PUBLIC funds … OUR funds.)

I don’t mean that bitterly(!), honest, I don’t. I have known some splendid ACE people, and been helped enormously by one in particular, in her kindness and care for me and the work I was trying to make – but it doesn’t surprise me she no longer works there, it’s become dreadfully hard in this divide and rule climate, not just at ACE, but at any funding body. I almost never hear hopeful stories from people about applying for funding, and while I absolutely believe our taxes should fund arts (as well as ticket sales), and am not at all impressed with the Coalition’s idea of philanthropy for arts instead of our own public money for arts (not least because I don’t believe the philanthropy thing will work for a moment, not for little companies like us, not unless we have a shiny fat building the shiny rich person can have named after them*) – while my stance is not at all to do with agreeing with the Coalition’s attack on arts budgets – I AM glad I haven’t had to try and please anyone with our form-filling technique before we could make this show. The one time I ever had any ACE money for a show was for my solo show Breaststrokes. As it turned out, I paid everyone who worked on it with me a reasonable fee (reasonable for mates rates!) and paid myself nothing. And I guarantee that every single artist I know could tell you the same thing about making work. The people who truly subsidise all arts are the artists themselves.
In this case, other than generous support from Ovalhouse as a co-producer, all we have to work with is ourselves.

An ‘ourselves’ that has grown as we opened up our rehearsals to people who contacted us and asked to come along – we’re working in Open Space, we thought we’d give it a go REALLY being open (and it’s worked!). An ourselves that incorporates designers and lighting designers and writers and performers and musicians and production, all of us doing other jobs as well, all of us writing as well as designing, acting as well as making music, or emailing in ideas and thoughts and responses across the world and through the night from shaky Christchurch to grateful London.
An ourselves that now gets to be in a room, opening space to call the Taniwha in with us. (And yes, even as I write that I do think ‘careful what you wish for’ …)
If you’re interested in working in Open Space, how we’ve done it for theatre, we’re having an after-show talk/chat/(open space?) about it at Ovalhouse on Wednesday 16th November.

I’ve been trying to work out how I feel for the past few days. And it isn’t exactly nervous, or excited, or worried, or concerned, or thrilled, or eager – it’s a bit of all of them and also none. Because there’s nothing (and everything) I can do about what our show becomes between now and when you (hopefully) see it. All I can do is hold the space, hold the people, and be as open as possible to allowing it, the show, to come into being. (And that holding, stepping back almost, to hold, is – of course – everything.) We’re working with a slippery thing here, a truly magical shape-shifter. We can’t tie it down too soon, we can’t decide what it is before it shows us. And much as part of me might like to get it all neatly sewn up now, giving us a lovely two full weeks to get it all tidy and pretty – and as much as poor Lizzie our production manager might be so grateful for that – another part of me (thankfully a larger part) truly believes in the process. Believes in Open Space and the people who are drawn to it, believes in the company that Shaky Isles is now and is becoming, believes in an idea that Emma called as a session at our company Open Space in January 2010 : 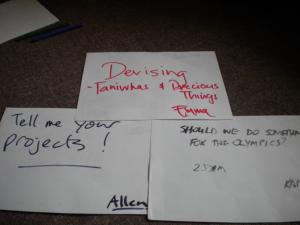 * any philanthropists who fancy correcting this assumption, feel free to contact me with your dosh! (Or a projector? We still need to borrow a projector …)